The French have introduced many innovations that have positively impacted the world, from technology to food. This article was posted in response to the November 2015 Paris terror attack.

In the aftermath of a terrible tragedy, or an act of malice, we are called upon to remain strong. We take it upon ourselves to stand together and to remember what gives us strength and unity. This is what the people of Paris, the people of France and all of us citizens of the world are doing now-remembering what gives us fortitude.

On Friday night when the horrific news broke, the first thing I did was reach out to family in France and friends in Paris to be sure that they were safe. Having dual American-French citizenship and having lived in Paris just blocks from the epicenter of the tragedy, the news really hit home. In fact, I am currently scheduled to spend the Thanksgiving holidays in France this upcoming week.

I must admit, I questioned canceling my family’s trip. But in a family meeting the other night, we agreed that we wouldn’t let hatred win by giving into fear. So we’re heading to Paris.

Given the recent events, and my upcoming trip, I thought about all the things I love about Paris, about France and its people. It’s a nation that has contributed so much to progress and the arts – A people hallmarked with a talent for the aesthetic and the ease of embodying joie de vivre.

The French are people that have contributed innovative ideas that have changed the world. Remembering our accomplishments helps create a sense of unity, of purpose, and future direction. This is what overcoming fear is about, and this is also something at the heart of innovation.

Let’s remember some now. Here are 10 French Innovations that have Changed the World:

The modern parachute was invented in the late 18th century by Louis-Sébastien Lenormand. Lenormand made the first recorded public parachute jump in 1783.

Lenormand coined the word “parachute” by combining the French prefix paracete, meaning to protect against, and chute, the French word for fall, to describe the aeronautical device’s function. The term Entrepreneur was coined as a word by French economist Jean-Baptiste Say, and usually is translated as, “adventurer”. Say pointed out in his writing that “it was entrepreneurs who sought out inefficient uses of resources and capital and moved them into more productive, higher yield areas”. Simply put, entrepreneurs seek opportunities for profit and by doing so they create new markets and fresh opportunities. French physician Rene Theophile Hyacinthe Laënnec invented the stethoscope in 1816. With the stethoscope he investigated sounds made by the heart. Laënnec published the first work on the use of listening to body sounds, De L’auscultation Mediate (On Mediate Auscultation). He is considered the father of clinical auscultation and wrote the first descriptions of bronchiectasis, cirrhosis and pulmonary conditions such as pneumonia, bronchiectasis, pleurisy, emphysema, pneumothorax, phthisis and other lung diseases from the sounds he heard with his invention. 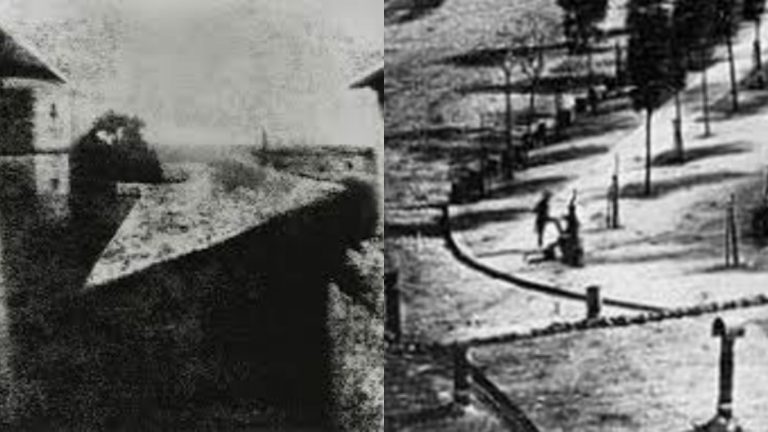 The first permanent photo etching image was produced in 1822 by French inventor Nicéphore Niépce. His photo View from the Window at Le Gras, is the earliest surviving photo from nature (i.e., image of a real-world scene as formed in a Camera Obscura lens).

Because Niépce’s camera photographs required an extremely long exposure (at least eight hours to several days), he sought to improve his bitumen process. In partnership with Louis Daguerre, he worked out post-exposure processing methods that produced superior results with exposure time measured in minutes instead of hours. Daguerre took the earliest confirmed photograph of a person in 1838 while capturing a view of a Paris street. This new process was publicly announced and the news created an international sensation. France presented this invention to the world as the gift of France on August 19th 1839. In 1853 French chemist, Charles Frederic Gerhardt, was the first to prepare acetylsalicylic acid (asprin). In the course of his work on the synthesis and properties of various acid anhydrides, he mixed acetyl chloride with a sodium salt of salicylic acid (sodium salicylate). Gerhardt called the compound he obtained “salicylic-acetic anhydride” This was the first preparation of (“salicylic-acetic anhydride”) aspirin. Pasteurization was invented by French scientist Louis Pasteur century. In 1864, Pasteur discovered that heating beer and wine was enough to kill most of the bacteria that caused spoilage, preventing these beverages from turning sour.. Today, the process of pasteurization is used widely in the dairy and food industries for microbial control and preservation of the food consumed. The very first patented film camera was designed by Frenchman Louis Le Prince in 1888. He developed a single lens camera in 1888, which he used to shoot the first sequences of moving film in the world, the Roundhay Garden Scene and Leeds Bridge. In October 1920 a new French law prevented bakers from working before 4 a.m. The law stated: It is forbidden to employ workers at bread and pastry making between ten in the evening and four in the morning. This made it impossible to make the traditional, round loaf of bread in time for customers’ breakfasts. The slender baguette, solved the problem, because it could be prepared and baked much more rapidly. Though France had already had long thin breads for over a century at that point the use of the word baguette for a long thin bread is a twentieth century innovation. French catering company salesman, Pierre Verdun, observed the large amount of time his clients spent in the kitchen chopping, shredding and mixing. He produced a simple effective solution, a bowl with a revolving blade at its base to chop. In 1960, his idea evolved into the Robot-Coupe. Verdun established a company to manufacture commercial food processors. By the 1960s, commercial strength food processors were produced for home use. In 1997 Philippe Kahn created the first camera phone solution for sharing pictures instantly on public networks. To announce the birth of Kahn’s daughter he rigged a mobile phone with a digital camera and sent off photos following her birth in real time.

It is this demonstrated attitude to keep looking for the new, to push beyond obstacles, and to move beyond tragedy and hardship that is behind the strength of humanity. Parisians will overcome, France will overcome, and nothing will put an end to what they will continue to bring to the world.